Although many of us have said we would rather be shot than give a speech there was one man who actually was shot while giving his speech. He gave an hour-long speech with a revolver ball lodged in his right breast. He was shot at point-blank range fracturing the fourth rib. The ball was 4 inches into the chest wall. Imagine being shot and still giving an hour speech!
Teddy Roosevelt as reported in The Outlook, October 26, 1912, did just that. 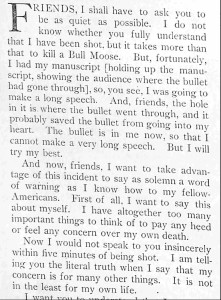 Please contact your Reference Librarian to read this firsthand account of the shooting and Mr. Roosevelt’s speech following the article.