On April 22, 1889 he rode an iron gray bronco from Caldwell, Kansas into the Oklahoma territory as an adventure, joining the 20,000 others who became known as the “Sooners”.  He later would paint a picture called “The Run” immortalizing the race for land.  At the time, he was a young man who had not discovered himself yet. He said he gave up his claim to a family he felt needed the land more then he did and went on to Oklahoma City to see it build up before his eyes. His name was John Noble.

The article above tells the story of John Noble who at age 14 was herding sheep on his father’s ranch near Wichita, Kansas. As a sheep herder he had plenty of time to practice his love of drawing while watching the sheep. As John got older he was given the opportunity to illustrate the stories written by David B. Leahy. David Leahy had many of his stories printed in the newspapers. John recalls in this article, that Mr. Leahy at that time was known to friends in Wichita as “Dynamite Dave”. As time went on, John picked up other mediums and began experimenting with pastels. Sometime around the age of 18, John Noble was given the opportunity by his parents to go to the Eden Park Art School in Cincinnati. This experience lasted about half of a year and then he returned to Kansas. After returning he moved around a lot and became known in his own words as “Wichita Bill”. It was during this time that he tells of his encounters with Wild Bill Hickok and Bob Dalton. 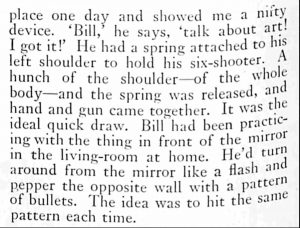 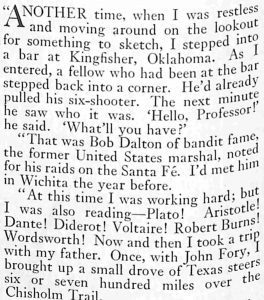 Included in this article is the famous story about Carry Nation hurling rocks at his painting called “Cleopatra at the Bath”. 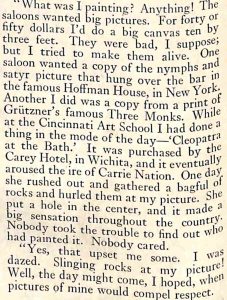 In the spring of 1897, John scraped together enough money to go to Paris to study art. This was upon the recommendation, of his friend Victor Murdock, who challenged him to become a real artist. 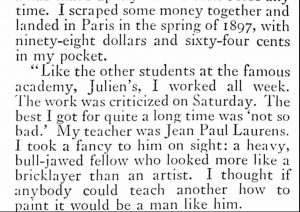 In Paris, he was known for wearing his cattleman’s hat and a necktie made of rattlesnake skin. He earned quite a reputation there with his six-shooter on his hip and not all of it was good. According to him, the people of Paris called him a “Kansas Cyclone”. He took up residence in Brittany and there he began some of his most famous paintings of ships and the horses that launched the boats. 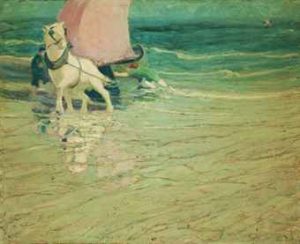 It is also where his painting “The Benediction of the Sea” was made. This painting showed the Breton peasants marching to the sea to bless it and give thanks for their lives. 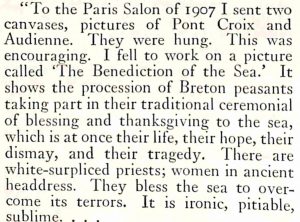 John eventually married and had children. When the war came he moved his family to London and was given the opportunity of having a show at which he earned $14,000.00. As a result of his success he was able to return to America. 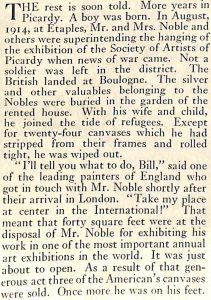 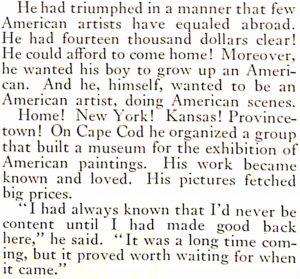 Upon returning to the United States, he settled his family on the East Coast. There he continued with his success. 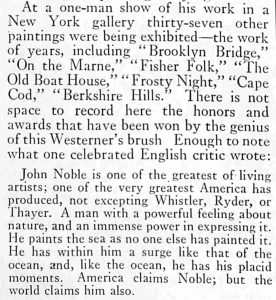 Researching John Noble brings to light that he struggled with alcoholism and eventually died while being treated for his addiction. It appears that this interview was done a few years before his death. His legacy of painting was carried on through his son John A. Noble, who is known for his paintings of great sailing ships on the East Coast. John A. Noble, is the sole reason for the Noble Maritime Collection.

The interview with John Noble is found in: