Baby animals are one of the signs of Spring. Mr. Harry Whittier Frees was quite a photographer of animals. An article in American Magazine in 1922 provides a glimpse of his work and insight into the artist himself. Harry tells us that his photography started as a child with the family cat. It soon became his way of life. Sometimes it took hours to get the perfect picture. 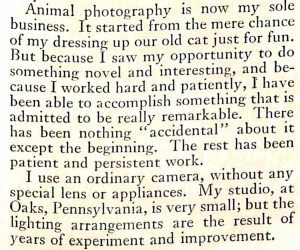 Harry photographed dogs, cats, rabbits, goats, squirrels, chickens, ducks, and pigs.  Oh, yes, did we forget to tell you the animals were in clothes and doing human tasks as well? 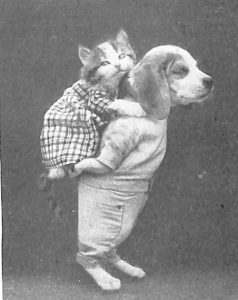 pg.27
His work was published in children’s books such as “Snuggles” by Marjorie Barrows and “Yip and Yap” by Ruth Dixon.   He also published some books by himself, such as “Four Little Bunnies” and “Little Folks of Animal Land”.  The names of his little friends included Rags, Tiddledy Winks, Beau Brummel the rabbit, Ruffles, Master Rover, and Mike the goat just to name a few. Harry loved his pets as is evident in reading this article. Even though the animals looked posed or possibly trained, Harry insisted that he simply dressed them and then used his camera and patience to get the pictures. The article talks in detail about some of the mannerisms of the different animals that he started to see as he worked with them. Ears of rabbits were a telltale sign to him of the rabbits mood. He also indicated that cats were the easiest to pose because they will just freeze when they are in clothes. Harry said cats have a great deal of dignity and they will try to preserve it by not moving. Pigs were the worst to work with and dogs were the best because they understood commands. He described how people can get along with other people as long as they put into practice the “three essentials” he used in the photography of his animals. 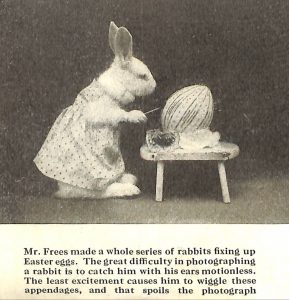 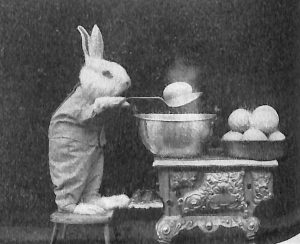