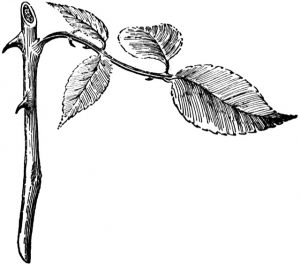 To celebrate Black History Month we mined from the archives an article with Kansas roots. In The Outlook Saturday, May 14, 1904 an article jumps from the page titled “A Negro Potato King”. First, this article is written by Booker Washington an accomplished African American in his own right. Second, it becomes very noticeable that this article is also about a fellow Kansan who became a successful farmer and businessman through complete grit and determination. So to celebrate Black History Month please take a moment to read with us about Junius G. Groves of Edwardsville, Kansas.

If you thought Kansas was only a wheat state, think again. In 1904, it appears that potatoes were being grown very successfully in the Kaw Valley by the Groves family. 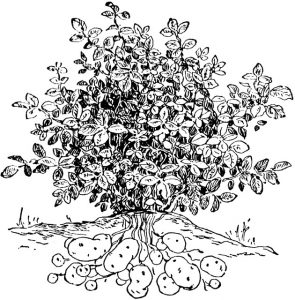 Born as a slave in Green County Kentucky, Junius and his parents were freed by the proclamation of Abraham Lincoln. During the “Kansas Exodus” in 1879 he made his way into the state with only ninety cents in his pocket. Gaining employment was not easy since the state was being inundated with people who needed work. Junius found a job on a farm where he would start earning forty cents a day. He worked very hard eventually gaining the respect of the owner, who increased his wages to seventy-five cents a day. At one point, he left to find better employment elsewhere in the state.  However, he soon decided to return to his old employer who was so happy he offered him some land to farm. 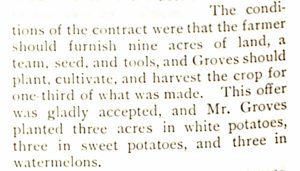 Shortly after receiving the land Junius married and his wife worked alongside him diligently.

Click the image below to view a portrait of the couple, from the Kansas Memory digital archives. 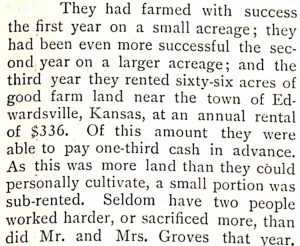 The Groves’ chopped wood in the winter and sold it to make ends meet.  Eventually they added to their farm some pigs, a cow and assorted chickens. In a few years their hard work paid off again.  The following paragraph describes the house they built together.

Click on the house below to view a photo of their home, courtesy of the Kansas Memory digital archives. 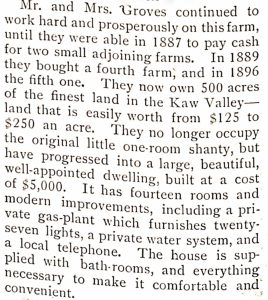 The article goes on to say that the farm had grown to the point that it had a private railroad track to ship the produce out to the main line of the Union Pacific Railroad which went through Edwardsville, Kansas. The farm also expanded to have orchards which produced apples, peaches, pears, cherries, apricots and grapes.

Along with their farm, Junius and Matilda’s family grew to eleven children. Even though he had a small amount of book knowledge he made sure that his children were educated as noted in the following paragraph. 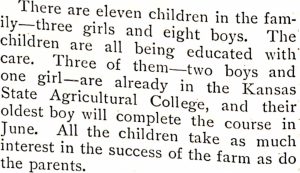 Junius also was active in his church and it is noted that he made sure to give of his talents there also.

Mr. Washington goes on to tell us why Mr. Junius G. Groves was considered by many to be the “Negro Potato King” as noted in the following excerpt:
Junius employed fifty people on his farm and also had invested in the latest cultivators, potato-planters, and diggers. The following sketches were found showing what items of that time period might look like.

Wealth did not change Junius Groves. He left a legacy of being a hard worker and he built an empire while keeping his moral character intact. This article gives several testimonies to his character by influential businessmen. The following is just one example: 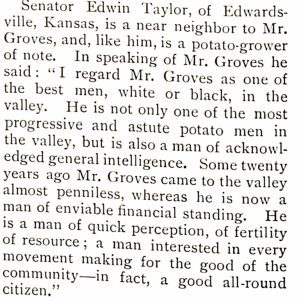 So from 40 cents an hour, with gritty determination, Junius Groves became the “Potato King of Kansas” and possibly of the world.

To read the entire article please see your Reference Librarian.

“A Negro Potato King”
by Booker Washington
The Outlook
Saturday, May 14, 1904

Clip art for this story http://etc.usf.edu/clipart/